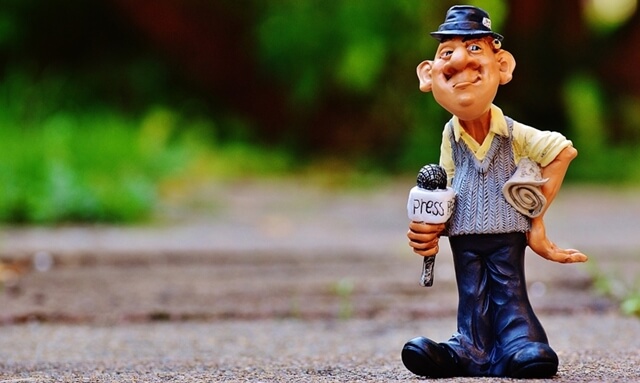 For some, speaking to the press can be stressful. For one thing, many of those in the tech world, from hackers and researchers, to venture capitalists and executives, harbor a healthy distrust towards members of the press.

Is that fair? Depends on who you ask. For the most part I think they have valid reasons for their distrust. Just this year alone, there have been a few items in the news which left me scratching my head wondering how in the world the story in question ever made it past an editor and into print.

I’m asked all the time about how one can go about speaking to the media, while at the same time maintain a level of protection for themselves, their work, and in some cases their employer or company. It’s a tricky question to navigate as each person and situation is different, but here are some basics things to remember when dealing with the press.

Know who you are speaking to

It’s important to remember, when a journalist comes to you for an interview, they’re supposed to identify themselves as journalists, and give you an idea of the story they’re working on. If you’ve ever had any experience dealing with the media, this process will ring some bells.

If you’re at a conference or event, journalists should have their credentials clearly displayed and they should be easily identified.

Set the rules at the start

Before you start the interview, or speak to a journalist, you should establish the type of conversation you’re going to be having and set some ground rules. There are three types of conversation to have, ON THE RECORD, OFF THE RECORD, and the most common – ON BACKGROUND.

Assume everything is on the record

Unless there is an agreement otherwise before the conversation starts, assume that everything you say to a member of the press is on the record.

You do so, not because the press is out to get you, but because life is easier when you just run with that train of thought. Off record conversations are fine, background conversations too, but you shouldn’t say something unless you are willing to see it as a headline in an article online, a newspaper, or on the television.

What does off the record mean?

They can’t quote you, and they can’t take the information you share and place it in a story without naming you.

Again, anything you say or share off the record is off limits.

The journalist is free to take anything you say or share off the record to other sources and try and get them to confirm it on the record. They will do this. It’s their job to do so. They won’t name you as the source of the information they’re shopping around, but they will look for on record sources.

Also, and this can’t be stressed enough you and the journalist have to both agree the conversation is off the record.

Just because you say the conversation is off the record doesn’t mean it is. The journalist has to agree with this and confirm they agree with it.

Please remember, you cannot say something and then claim it is off the record after the fact. It doesn’t work that way. This is why it is so important to set the rules first, before the conversation happens.

Sometimes conversations can take time. You are completely allowed (and well within your rights) to reconfirm the rules of the conversation and make sure you’re still off the record. If you’re uncomfortable with the direction the conversation is taking, feel free to end it at any time.

Relationships are important to journalists. If you have a strong relationship with a journalist, and you’re comfortable with going off the record with them, then do so.

But relationships are earned, and they take time to forge. I’ve been working as a journalist for more than a decade, and I can count on both hands the number of people who go off the record with me regularly, or are always off the record unless otherwise stated.

Off record conversations are not something to take lightly.

Journalists are people. As such, there are good ones, bad ones, and those who exist somewhere in the middle. Thus, you may find a journalist who promises never to mention something you’ve shared, and then they do it anyway.

The majority of working journalists would never burn a source intentionally, and using remarks that were given off the record in confidence would instantly burn the source. However, as mentioned, journalists are people too, and so bad apples exist.

What does on background mean?

On Background
On background conversations are really common when it comes to dealing with the press. These conversations mean the journalist can use what you’ve said or shared, but they cannot name you as the source. You may sometimes hear this as not for attribution.

Not everyone will agree

Now that the basics are outlined, there are a few other details to consider.

First, not every journalist will agree to go off the record, or even on background. Our job is to get people on record and inform the public. Sometimes, our editors (bosses) will not allow background or non-attributable sources. Again, this is why getting the conversation rules outlined at the start is so very important, it will save you from headaches down the line.

Also, you’re allowed to make conditionals – such as paraphrasing your statements and requiring that you aren’t named directly – but again, the journalist has to agree with you before you share any information or make statements.

There is a catch to this (and it is worth repeating): You can’t say something first and then try to apply rules to it after the fact.

Hopefully these quick tips are useful. They’re part of a series of talks I’ve given this year at various security conferences with my friends Sean and Paul, and one of the sections I teach when I do actual media training for individuals or corporations.

If you have questions, feel free to reach out and ask. You can email me or hit me up on Twitter.